Monday commenced day one of striking for members of the Ontario colleges union that represents faculty, librarians, and counselors.

Read the latest on the strike coverage page

Due to a deadline passing for negotiations between the Ontario Public Services Employees Union and the Ontario Employers Council on Sunday, a strike came into effect Oct. 16.

College staff are paid a stipend from a union pool funded by dues paid over the time of their union membership if they participate in striking, either through picketing or otherwise.

Humber professor Tyler Shipley said picketers were arriving as early at 6:30 a.m. to the picket line set up along Humber College Blvd. with most dispersing around 2:00 p.m.

Shipley, who has no official affiliation to the OPSEU, said that a “strike is something no one ever wants to happen”, saying it is the “most dramatic confrontation” most have had to ever experience in the workplace.

Humber picketers were warmed by the support of many students joining them in the sidewalks.

Shipley said every student he had talked to coming onto campus on Monday turned out to be supportive of the strike, hoping that faculty receive their demands so that the strike would end.

The local OPSEU chapter set up de-facto headquarters for the Humber campus strike in a Mobilease trailer in parking lot five outside the college.

Joanne Settle explained that Humber provided counseling and examination accommodations, among other services, to Guelph-Humber that are no longer available.

On campus, however, the Post found that GH-specific services such as the media cage, printers and computer labs were still available to students.

Humber students started a Change.org petition requesting that colleges reimburse their tuition for every day lost to the strike that has garnered some 53,222 signatures online.

A Facebook group called “Students For Ontario College Faculty” has also gained signatures for their physical petition at several institutions including Fleming and Alqonquin colleges.

Outside of the University of Guelph-Humber, beyond the picket line at Humber Ave., the bus hub was quiet and the sidewalks appeared to be a ghost town. 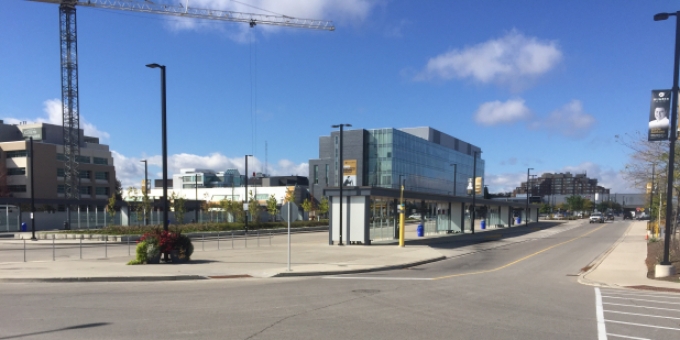 Inside the school it wasn’t much different.

Besides a few students following what the school said by continuing to work on assignments and study, usually what would be a busy day at GH was otherwise quiet.

GH has requested students gain the most up-to-date information regarding their school on its official updates page.

The Ontario Public Service Employees Union has demanded more full-time positions to a 50/50 ratio of full time to other types and an increased role of faculty in academic decision-making.

In response, the College Employer Council has offered a 7.75 per cent salary increase and improved process for contract faculty to become full-time.

Read the latest on the strike here

The Council said meeting the demands of the union would “add more than $250 million” to annual costs alongside the loss of several thousand contract jobs.

“The colleges have had this year alone a $188 million surplus and the college presidents had not eight months ago gone to the government looking for increases of over 20 per cent for themselves,” Hornick said.

The province had dismissed the salary raises for college senior executives in January of this year.

The other major sticking point for the union representing thousands of college staff is the role of faculty and students in making academic decisions.

Hornick explained that the union seeks “a balance between faculty, administrators and students making the academic decisions in the college” with “everyone participating.”

The council called the strike “unfair to hundreds of thousands of students” in a statement released on Sunday.

Some students have decided to join faculty on the picket line, some in support of their demand for more full-time positions, among other items of contention.

Guelph-Humber, as with nearly all campus’s affected by the strike, is still open and some services are still available.

Printing papers, using computer labs and the learning resource space is still available, but the GH Cafe is closed.

Some 12,000 College staff are on strike as of Monday, leaving some 500,000 students without professors.

U of GH is in the exclusively unique position of having both Humber College and University of Guelph professors at its campus.

The GH administration said that because they could not offer all programs in full without Humber staff the university would shut down all classes in the event of a strike.

Late on Sunday, the strike was confirmed as moving ahead.

Related Topics:
Up Next

Spirits up on strike day 2

There are no special actions at this time.

Humber College said it is monitoring the novel coronavirus outbreak and its “potential impact on the institution” in a statement posted online last week and updated on Monday.

Toronto Public Health told the college that “there are no particular actions required” at this time.

A special group tasked with keeping the campus community informed on the latest precautions for the virus has been established, made up of stakeholders from various departments and the University of Guelph-Humber.

The college’s announcement also asked that those on campus “wash their hands as frequently as possible” due to it being the winter flu season.

As of Tuesday morning in Ontario, there is one confirmed case of the novel coronavirus, one “presumptive” case and 11 cases under investigation. ■

Nomination packages are due by Feb. 14.

IGNITE on Tuesday posted details and nomination packages for its 2020 elections on social media, setting up its first ever election without executive positions.

There are 10 positions open for students to run for, all on the Board of Directors.

There are four positions open at North Campus, three seats at Lakeshore, two open at Guelph-Humber and a sole position available at Orangeville.

All nomination packages are due by Feb. 14 and can be filled out on the elections webpage. ■

Bell let’s talk day will be coming to Humber on Jan. 29.

Bell will be bringing their yearly Let’s Talk event to Humber College this week.

Let’s Talk Day is a national day of raising awareness about mental health and furthering the conversation of acceptance, support and to decrease stigma.

The day also encourages the use of various platforms including social media to engage individuals. Bell also donates money to mental health funds based on messages sent throughout the day on their cellular network and social media posts.

Bell will be hosting two events at both Humber North and Lakeshore Campuses on Jan. 29.

The event is open to both Humber and Guelph-Humber student

Students who wish to contribute to the cause can make a tweet, a social media video, use Bell’s Facebook frame or Snapchat filter and also use the hashtag #BellLet’sTalk on social media. ■

The Toronto Raptors defeated the Chicago Bulls 129-102 on Sunday.

The Toronto Raptors beat the Cleveland Cavaliers 115-109 on Thursday.

There are no special actions at this time.

It comes after the university cuts off the student union.

Nomination packages are due by Feb. 14.